The monitoring and supervision of production processes are becoming requirements perceived by an increasing number of companies. TQM Itaca Technology has developed the ITALARM software application for the monitoring in real time of the statistical alarms of all the measuring stations existing in the company.

Based on a Server-Client architecture, Italarm monitors all the data written into an Itastat MS-SQL database by an Italarm Server. On the server it is possible to set all the critical characteristics which you want to keep under control with the immediate display of the batches containing the characteristics in alarm. Using the Italarm clients it's possible the remote monitoring allowing efficient reactions to the alarms.

Italarm is useful both as a summary for the different supervisors and as a system of alarms reporting and consultation towards the production lines.

In the example screenshot three monitored emplacements are displayed on the left side of the screen and two of them are in alarm state. 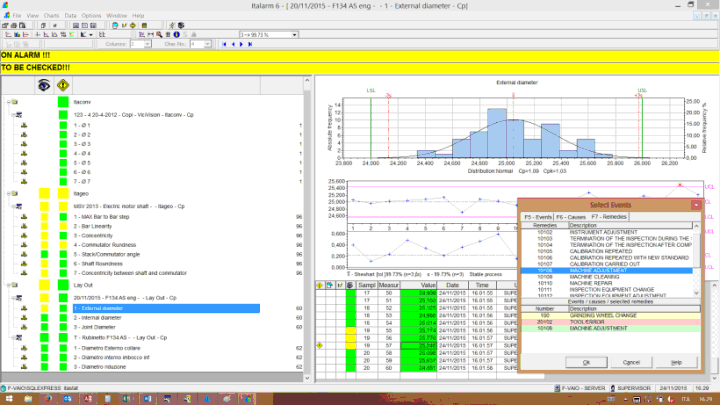 In the right side there are three charts: Histogram, Control Chart and Data Table of characteristic 5 – Oscillation of F compared to A, with an open window showing the cause of the alarm and the remarks/events posted by the operator.

The statistical alarm information can be announced on the shopfloor in different ways:

The criticality of statistical alarms can be set according to three levels: critical, important or secondary, highlighting each level with specific colors.

FaLang translation system by Faboba
Save
Cookies user preferences
We use cookies to ensure you to get the best experience on our website. If you decline the use of cookies, this website may not function as expected.
Accept all
Decline all
Read more
Analytics
Tools used to analyze the data to measure the effectiveness of a website and to understand how it works.
Google Analytics
Accept
Decline